Start this Hollywood and Highland tour in the beating heart of Hollywood, where the Walk of Fame meets the Dolby Theater, home of the annual Academy Awards. Movie history is everywhere in the blocks surrounding the famous intersection – if you know where to look. Also check here as you do the tour, to discover the locations of some famous movies which were filmed in the area.

LOOKING FOR A GUIDED TOUR OF HOLLYWOOD?

CLICK HERE TO LEARN ABOUT OUR GUIDED HOLLYWOOD TOUR! 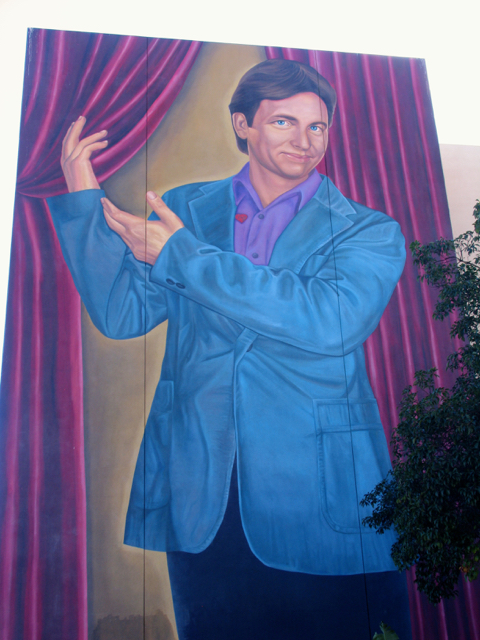 More than a hundred years before you began this Hollywood and Highland tour where you’re now standing was open land in all directions. That’s one of the reasons why the nascent film industry moved to Hollywood (in the 1910’s) – because land was cheap and plentiful for those movie pioneers. So when Hollywood High School opened, in 1903, many of the students lived on local farms and would ride to school on horseback. As the years passed and the movie industry developed a lot of the students would go on to be big stars, including Judy Garland, Lana Turner and Laurence Fishburne. Fun fact: As you look at the school you’ll see the mural by Eloy Torres called “Portrait of Hollywood” – the beautiful blonde lady is Lana Turner. She was discovered when she skipped class one day to get a soda at the pharmacy on the corner of Sunset Blvd. Want to be discovered? Unfortunately the pharmacy is long-since closed. 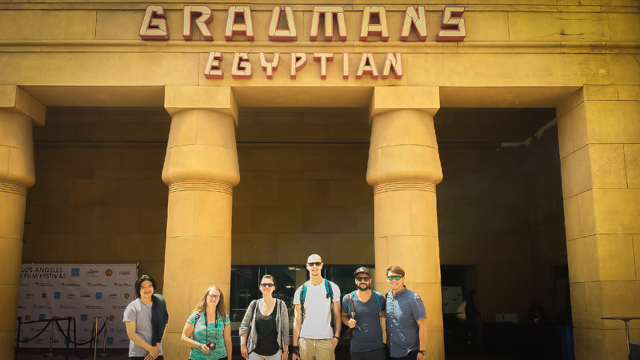 No one actually knows why the Egyptian Theater is designed in the Egyptian style. Probably Sid Grauman, the impresario who commissioned it, was inspired by the search for Tutankhamun’s tomb (the theater opened a month before Howard Carter discovered the tomb). Nevertheless when it opened in 1922, with Douglas Fairbanks’ Robin Hood, it held the first ever red carpet ceremony. In those days seeing a movie here was a big deal – there would be fire-eaters and jugglers in the forecourt and a dancing show supported by a full orchestra before the movie began. Fun fact: You may think that the roof doesn’t look very Egyptian and you’d be right. The theater was originally supposed to be Hispanic in design, but Grauman changed his mind after he’d bought the tiles and like any good businessman he wasn’t going to waste his money, so they were still utilised. 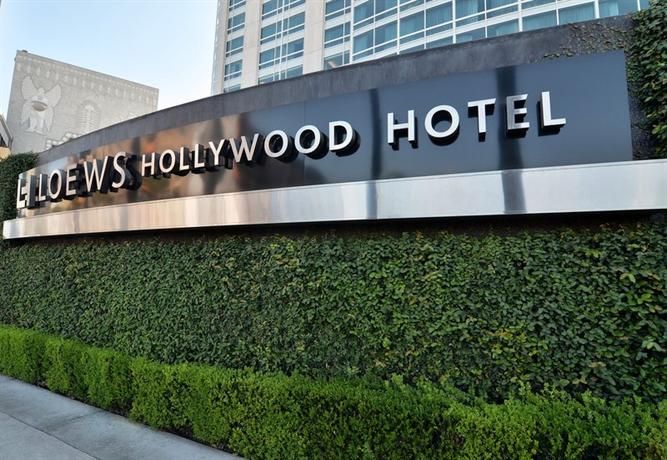 For this stop on our Hollywood and Highland tour we’re getting very glamorous. You’ve probably heard of the Academy Awards – a big awards ceremony held in Hollywood every year. On that day everything in Hollywood stops and all eyes are on this area – Hollywood and Highland. All the nominees and guests prepare in the rooms at the hotel here and when they are ready, jump in a limousine and literally drive around the corner to the Dolby Theater. They could walk of course – but that’s not how you make an entrance! After the show they come back to the hotel for the media events and the Governor’s Ball, the after show event that everyone attends. Fun fact: the hotel is closed for the day of the Oscars, so unfortunately you won’t be able to stay there and sneak into the ceremony. 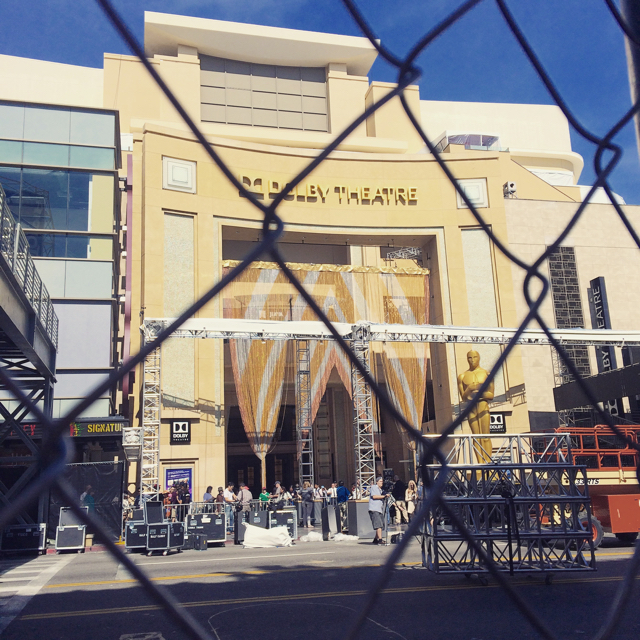 Did we mention the Academy Awards ceremony is held in Hollywood ? Oh yeah… Well this is where it’s held. Before the Dolby Theater (then known as the Kodak Theater) opened in 2001 the ceremony had bounced all over Los Angeles (being held in no less than nine venues). It’s perhaps not surprising that after all that moving around the Academy wanted to have their own venue for what is, after all, the biggest awards ceremony of them all. It seats an incredible 3,400 guests and has room for 75 musicians in the orchestra pit. Fun fact: if you look up at the entrance you’ll notice that it’s designed to look like a film negative. The idea was that you’d have the feeling that you’re literally walking into the movies, which is ironic now as most movies are shot on digital video. 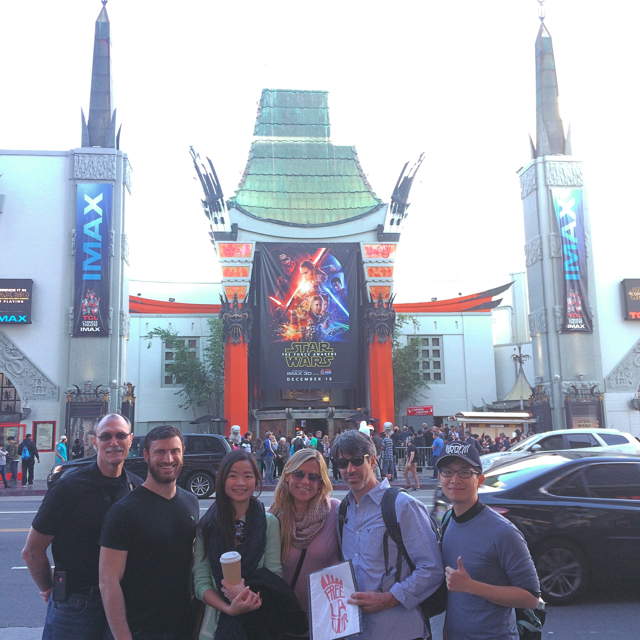 The Chinese Theater has to be on any Hollywood and Highland tour. It’s another one of Sid Grauman’s, opening in 1927 with the movie The King of Kings and that’s when they began commemorating the stars by having their footprints set in concrete. Versions of the story of how this began abound, but the official one is that Norma Talmadge (a huge star who was invited to the premiere) accidentally stepped on some wet concrete at the premiere and Grauman, ever the showman, insisted that the footprints should be preserved. Since then over 200 stars have been commemorated in this way – using their hands, feet, autographs and even a cigar (Groucho Marx). Fun fact: TCL Corporation, owner of the Chinese Theater, is actually a Chinese company – so now it really is a Chinese Theater, or a Chinese Chinese Theater… 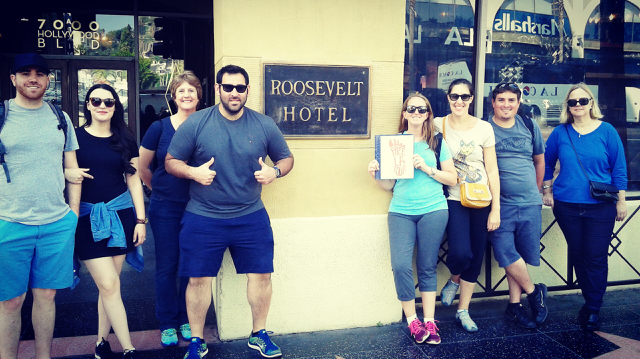 Did we mention the Academy Awards… Okay we get it! Well this was the venue for the very first Ademeny Awards ceremony in 1929. 250 guests were invited and the actual prize-giving took just fifteen minutes! It was more like a private industry event. The hotel itself opened in 1927 and was funded by a series of Hollywood heavyweights, including Douglas Fairbanks, Mary Pickford and Sid Graumann. Marilyn Monroe lived here for a while, as did Montgomery Clift (if you don’t know him look him up!). Fun fact: this is the oldest continuously operating hotel in Hollywood and perhaps for that reason it has the most stories of hauntings and ghost sightings of any hotel in the area. Take a look inside the lobby – it’s beautifully designed in the Spanish Revival style. 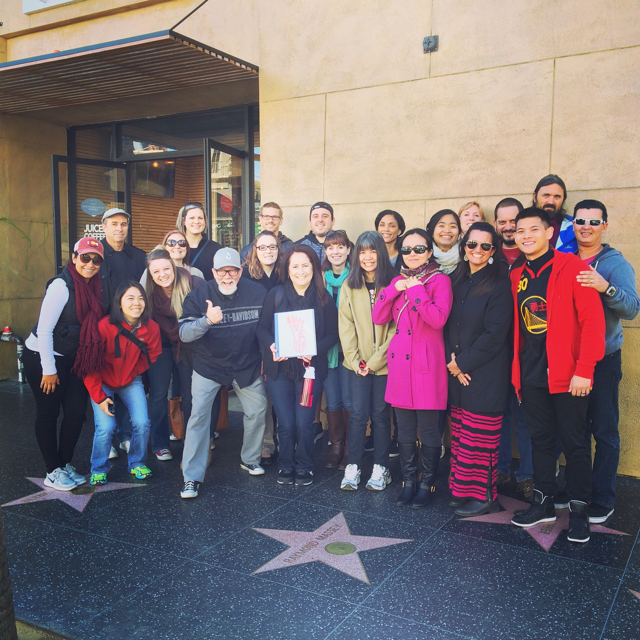 The last stop on your Hollywood and Highland tour is probably one of the sights you most wanted to see here. In the 1950’s Hollywood was becoming quite run down, so the local Chamber of Commerce came up with a scheme to give the area more lustre. Once again, like much of Hollywood history, no one knows exactly where the idea came from, but one theory is that the idea for the Walk of Fame came from the old Hollywood Hotel (on Hollywood and Highland) and the stars that were painted onto its ballroom ceiling. The first stars were laid down in 1958 and within a couple of years over 1,500 had been added. The Walk stretches from Hollywood and La Brea in the west to Hollywood and Gower in the east (about two miles). Now it holds over 2,500 stars and there are unveiling ceremonies three-four times a month. Fun fact: honorees have to pay $40,000 (at the time of writing) for the costs associated with their Hollywood Walk of Fame star.

Check our guide on places to eat in Los Angeles before/during/after your self-guided Hollywood and Highland tour.