Start this Civic Center and Grand Avenue tour at Los Angeles’ famous City Hall, do a loop through the Historic Core and then end the tour at the stunning Walt Disney Concert Hall. Also check here as you do the tour, to discover the locations of some famous movies which were filmed in the area.

Your Civic Center and Grand Avenue tour starts at Los Angeles City Hall. You can’t miss it – it’s the biggest building in the Civic Center, the name for the area and its collection of courthouses and government buildings. City Hall opened in 1928 and was designed by John Parkinson, L.A.’s most prominent architect at the time. It was very controversial, as the city only needed the first four floors for it’s municipal government. For a long time City Hall was L.A.’s tallest building, at 454 feet high, as from 1904 to 1956 there was a building height restriction of 150 feet. So you could see City Hall from miles around, but now, as you can see, there are many taller buildings (including quite a few in downtown). City Hall has featured in many movies and TV series, including L.A. Confidential and the recent movie The Nice Guys. Fun fact: There is an observation deck at the top of City Hall – which is free. Enter from the Main Street entrance and security will give you directions.

This was Los Angeles’ Roman Catholic cathedral from 1885 to 1994 and was designed by the architect of Pico House (Ezra F. Kysor – believed to be the first professional architect in Southern California), which is on the Union Station/ Pueblo Tour. By 1996 it was obviously much too small for a city of Los Angeles’ size and, having been badly damaged in the 1994 Northridge earthquake, the Archdiocese decided to demolish the cathedral to build a new one on the same site. The Archdiocese began demolition early on a Saturday morning by removing the cupola. Getting wind of what was happening preservationists (such as the Los Angeles Conservancy) moved quickly and managed to get a temporary restraining order on the demolition. A stand off ensued until the city of L.A. broke the deadlock by offering the Archdiocese land that it owned on Grand Avenue, where the Archdiocese went on to build The Cathedral of Our Lady of the Angels (dedicated in 2002).  Fun fact: Vibiana is now an event space, where post Grammy Awards parties are often held.

The oldest commercial building in Los Angeles’ Historic Core the Bradbury is an acknowledged historical and architectural gem – perfect for this Civic Center and Grand Avenue tour. Completed in 1893, it was built for gold mining magnate Lewis Bradbury as an office building for his company. As often happens today, he wanted an iconic building – and he got one. George Wyman, who wasn’t even a qualified architect at the time, and Sumner Hunt were the two architects responsible for the design. From the outside it’s a handsome building, but the inside is the part that you have to see. Wyman had read a novel that came out at that time, called Looking Backward, and it heavily influenced the open court in the middle of the building. Famously Blade Runner, The Artist and (500) Days of Summer were filmed here. Fun fact: Lewis Bradbury died a few months before it opened, so he never saw the building that bears his name and Wyman never designed any significant buildings ever again. 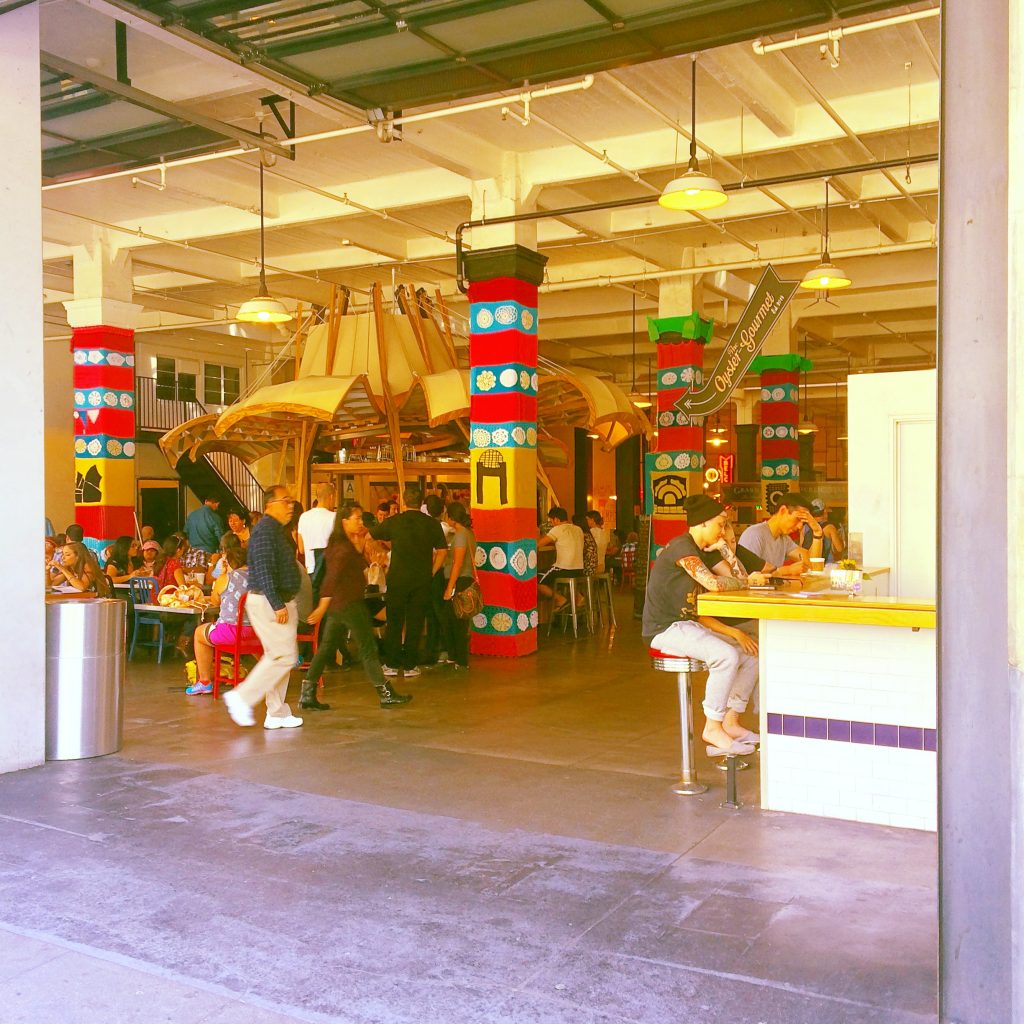 A Los Angeles institution since 1917, the Homer Laughlin Building was also designed by John Parkinson. It opened in 1896 just as this part of downtown was becoming commercialised (until then it had been a residential area). At the time there was a high-end department store here called Ville de Paris. For a long time the market was mostly full of vendors selling fruit and vegetables, meat and fish, but since 2012 the market has been taken over by more gourmet food outlets and now you can get anything from Thai food to tacos to Texan BBQ. Recently Bon Apetit magazine voted GCM (as it’s known in L.A.) one of the top ten food destinations in the U.S., so you’ll probably want to take a break from your Civic Center and Grand Avenue tour here. Fun fact: one for the architecture aficionados – Frank Lloyd Wright had his offices here for a time in the 1920’s.

Downtown’s (and Grand Avenue’s) latest big addition, in terms of the arts scene, the Broad opened in September 2015 and became an instant hit. A top quality art collection, in a beautifully designed museum, to which admission is free. What’s not to like? You can line up on the day, but the smart move is to register in advance, to save time. The modern art collection includes work by many famous artists, including Jeff Koons, Roy Lichtenstein and Andy Warhol. The main galleries are on the top floor, reached by an escalator that runs through the center of the building. It takes about an hour and a half to two hours to see everything – in other words the perfect amount of time! Fun fact: there is a design feature on the front of the building called the Oculus. It resembles an eye looking out over Grand Avenue.

Your Civic Center and Grand Avenue tour is now taking you through the heart of the cultural quarter on Grand Avenue and at one of the most iconic buildings in Los Angeles – the Walt Disney Concert Hall. It was designed by Frank Gehry and has been hugely influential in the architectural field. Gehry was one of the first architects to use computer software to design buildings. It led to a revolution in the way buildings were designed and architects began to get much more creative and even artistic in their designs. The Walt Disney Concert Hall is the home of the Los Angeles Philharmonic Orchestra and was largely funded by Lilian Disney (who was married to Walt Disney) and the Walt Disney Company, hence the name. Fun fact: the concert hall is one of the very few in the world in which the sound of the orchestra is exactly the same whether the hall is full or empty and for that reason is used a lot for recording film scores.

The Music Center opened in 1964 with the Dorothy Chandler Pavilion, home to the Los Angeles Opera. It’s named after Dorothy Chandler, the wife of the owner the Los Angeles Times at the time. The complex was her brainchild and she was remorseless, eventually raising more than half of the $35 million needed to finance the project – usually by not taking “no” for an answer (including roping in Hollywood stars like Cary Grant, Kirk Douglas and Gregory Peck). In 1967 the Mark Taper Forum and the Ahmanson Theatre opened and they are now home to the Center Theater Group, L.A.’s premier theatre company. Fun fact: The Dorothy Chandler Pavilion has hosted the Academy Awards Ceremony more times than any other venue. Another fun fact to end your Civic Center and Grand Avenue tour: the Mark Taper Forum opened with a play called The Devils with Ronald Reagan and his wife Nancy in the audience. It was a controversial piece about a priest and a sexually repressed nun. Reagan left at the interval with Nancy and they didn’t return!

Check our guide on places to eat in Los Angeles before/during/after your self guided Civic Center and Grand Avenue tour.