Start this Rodeo Drive and Beverly Hills tour at the storied Beverly Wilshire Hotel and stroll past the designer boutiques of the famous shopping district, then check out some high culture, before ending the tour at another famous hotel – the Beverly Hilton.

LOOKING FOR A GUIDED TOUR? 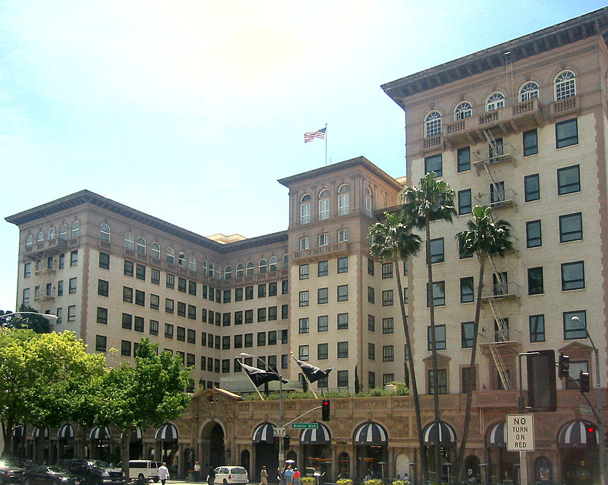 Where better to start your Rodeo Drive and Beverly Hills tour than the “Regent Beverly Wilshire” (as it was known then) from Pretty Woman, where they filmed several scenes. It’s also appeared in countless other films and way too many famous people have stayed to list them all, but Elvis Presley, Warren Beatty and John Lennon have all spent extended periods of time living here. If you’re looking for the Beverly Hills experience then this is it. It’s also at the bottom of Rodeo Drive, so it’s a great place to start this tour. Do yourself a favor and sit in the café off the lobby, watch the world go by and have a tea or coffee. It’s going to cost you a small fortune, but what the hell? You’re in Beverly Hills baby! 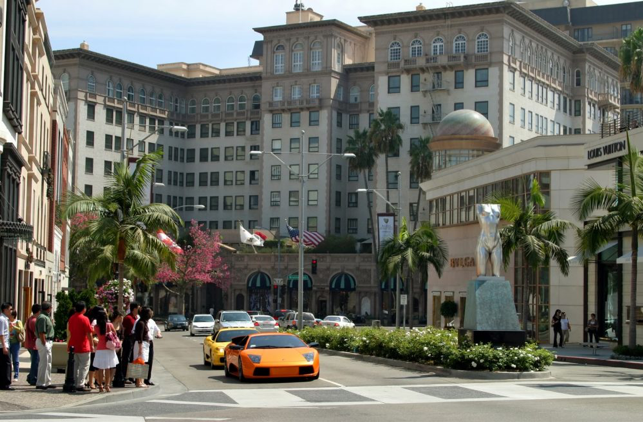 From the Beverly Wilshire walk straight up Rodeo Drive. Nowadays Rodeo Drive is seen as almost the premiere high-end shopping district in the world, but it wasn’t always. Until the late 1960’s/1970’s the street just contained the kinds of stores you’d find on any Main St back then. It was during this period that there was a concerted effort by the Rodeo Drive Committee to create a Mecca for the “culturally elite lifestyle.” As you walk up the street on the right you’ll pass the Anderton Court Shops. They opened in 1952 and are the last buildings designed by celebrated architect Frank Lloyd Wright to be built in Los Angeles. By no means amongst the most important buildings by him, they nevertheless bring an interesting aesthetic quality to the area, even though much of the original design has been changed. If you’ve come here hoping to spot movie stars swanning around designer boutiques with decaf soy lattes you’re probably going to be disappointed – they don’t shop here. If seeing someone famous is high on your list of things to do in Los Angeles then check our confidential guide to guarantee seeing a ‘celebrity’. 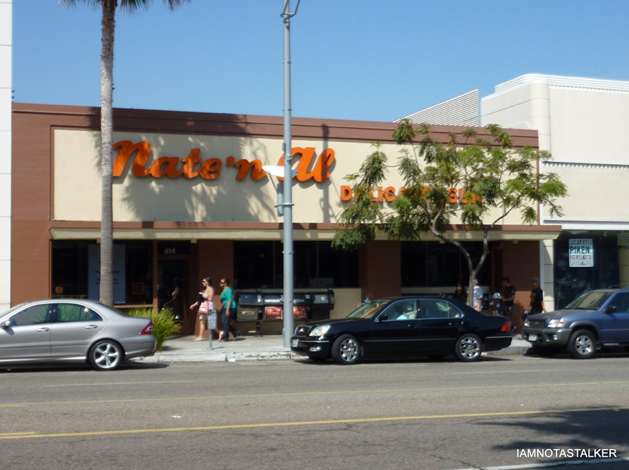 Just a block from Rodeo Drive, and well within the shopping district, is this old-school Jewish Deli. Still sitting like Marley’s Ghost on N Beverly Drive, there are moves afoot to sell this Beverly Hills landmark – so pause your Rodeo Drive and Beverly Hills tour for a moment here and get a(nother) coffee quick. In spite of its location the menu is very reasonable and many of the waitresses have been working here since Nate N’ Al’s opened in 1945 (or at least it seems very possible that they have), bringing a lot of character to this fine establishment. Funnily enough this is one of the best places in Beverly Hills to actually spot a celebrity. 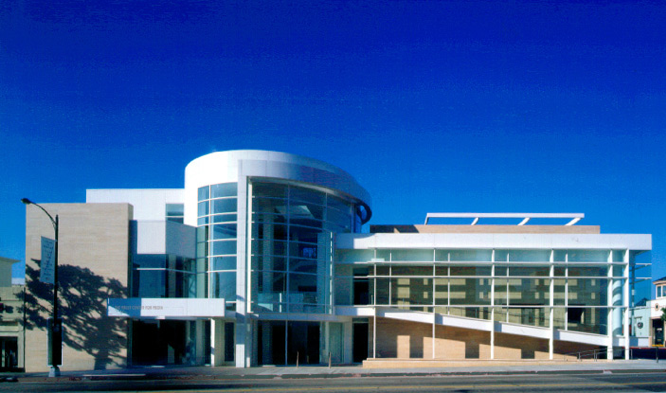 Culture may not have been something you were looking to get from your trip to Beverly Hills, but there is culture to be consumed here too – in this case popular culture. The Paley Center has a great program of events, including panels with the casts of popular TV shoes, such as Dear White People and Homicide: Life on the Streets, and exhibitions. Check what the program is before your visit so you can make the most of this opportunity. 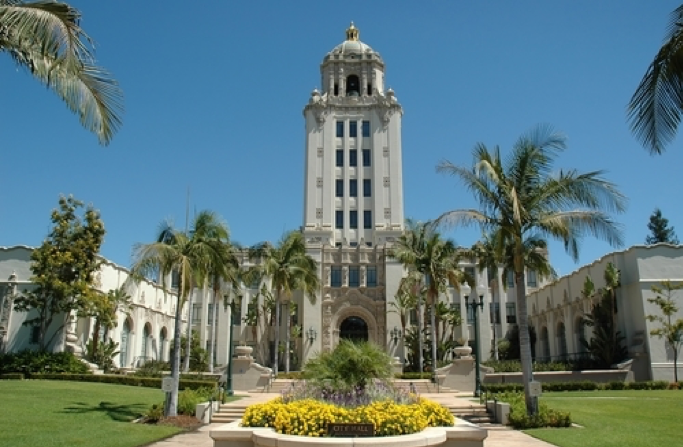 Next stop on your Rodeo Drive and Beverly Hills tour is this iconic Beverly Hills landmark. Famously Beverly Hills City Hall was the location of the Police Department in Beverly Hills Cop and it’s appeared in many other movies, as you’d expect. Opened in 1932, the Los Angeles Times described it as the “largest and most expensive City Hall of any municipality its size in the country.” Well, it is Beverly Hills! The design is Churrigeresque (or Spanish Revival), which was all the rage back then and it’s a beautiful building. 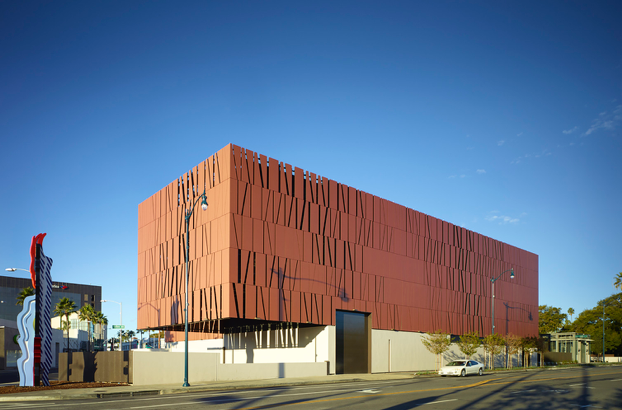 This building was once the Beverly Hills Post Office (opening in 1934), but it was deemed surplus to requirements in 1993 and in 2013 reopened as a performing arts venue. They have some important productions, with heavyweight actors (such as Jeremy Irons and Lesley Manville in Long Day’s Journey into Night by Eugene O’Neill in June 2018) as well as dance and other events. Check it out! 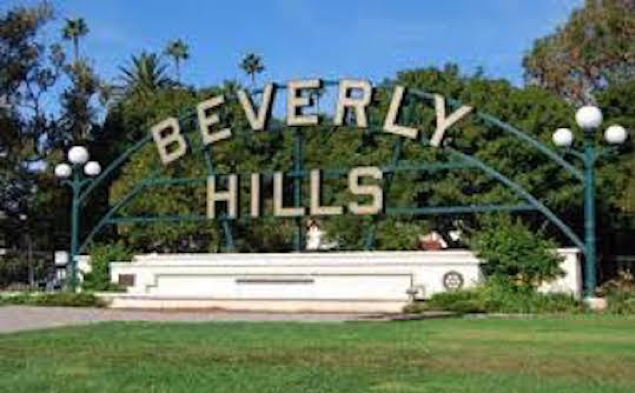 This is a beautiful spot to take a breather on your Rodeo Drive and Beverly Hills tour and take everything in – right in the heart of Beverly Hills. The gardens stretch for 22 blocks (nearly 2 miles) along Santa Monica Boulevard and you can walk through the park all the way to the Beverly Hilton (the next stop on the tour). Also the Beverly Hills sign here could almost have been made for Instagram – it’s going to go viral!

Finish your Rodeo Drive and Beverly Hills tour at another hotel, the famous Beverly Hilton. The hotel opened in 1955 and has hosted the annual Golden Globes (the ever so slightly less glamorous sister of the Academy Awards) every year since 1961. Tragedy struck here in 2014, when Whitney Houston was found dead in the bath in her suite, but on a brighter note several stars have been discovered lounging around the pool. Although the Beverly Hills Hotel pool is better known for launching stars’ careers (Raquel Welch is probably the most famous star discovery there), that doesn’t mean you can’t give it a shot. So throw on the Speedos, or bikini, and dive in. You’re in Beverly Hills, home of the stars!

Check our guide on places to eat in Los Angeles before/during/after your self guided Rodeo Drive and Beverly Hills tour.