Start this Union Station and Los Angeles Pueblo tour at the beautiful 1930’s Union Station and go back in time to the earliest years of Los Angeles, when it was a tiny farming town in the Wild West. Also check here as you do the tour, to discover the locations of some famous movies which were filmed in the area.

*Walking Distance: less than one mile.

LOOKING FOR A GUIDED TOUR OF DOWNTOWN L.A.?

CLICK HERE TO LEARN ABOUT OUR GUIDED DOWNTOWN TOUR! 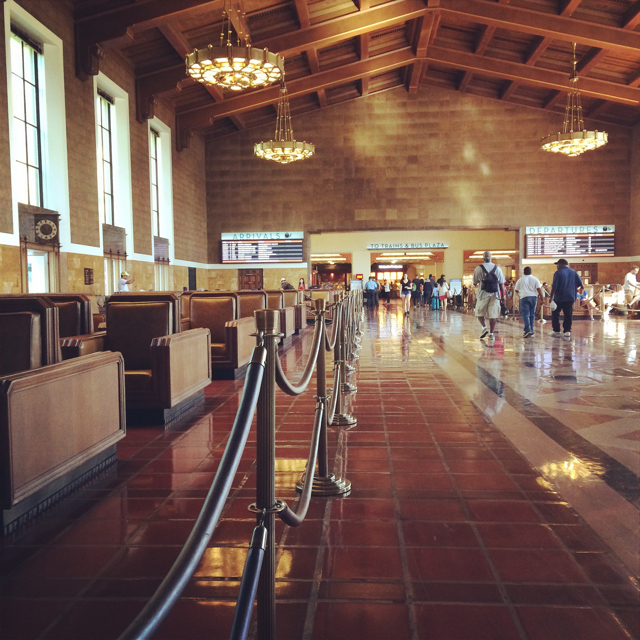 Start your Union Station and Los Angeles Pueblo tour at this 1930’s John Parkinson designed masterpiece. Los Angeles wanted to build a grand terminus for thirty years before construction began in 1933 – the railroad companies were so against it that the city took them all the way to the Supreme Court, twice. But it was worth the wait! The Mission Revival style (with some Streamline Moderne thrown in) was designed to help with the promotion of L.A. as a holiday destination. And it seems to have worked. Marvel at the ceiling, which though it looks like wood is actually made of reinforced concrete, and wallow in the romance of train travel. It’s been used a location in numerous movies, including Blade Runner and Catch Me if You Can. Fun fact: Union Station opened in 1939 and is the last major station ever to be built in America. 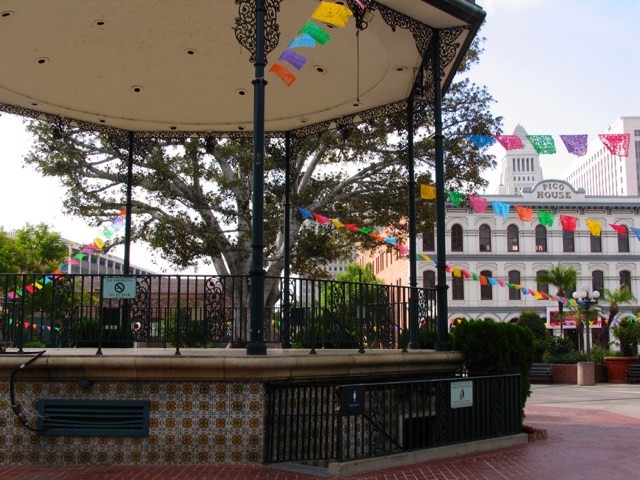 Believe it or not, this is where Los Angeles began as a small sub-mission, or Asistenzia, in 1781. Forty-four settlers moved here from Mexico and founded the tiny pueblo. The next year nearly half of them went back! Nevertheless L.A. has grown a lot since those tiny beginnings. The remarkable thing is that many of the earliest buildings, when L.A. really was the wildest of the wild west, are still standing around the Plaza, including Pico House (1871), the Garnier Buildings (1883 and 1890) and the oldest Fire House in the city (1890). Fun fact: there is a list of the forty-four Pobladores on the south side of the Plaza on a plinth. 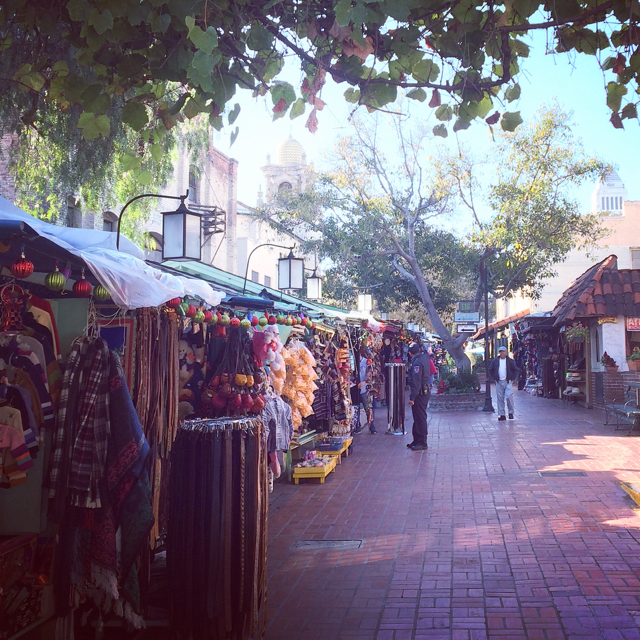 The oldest building in Los Angeles, the Avila Adobe (which is just down Olvera Street from the Plaza) was built in 1818 by Francisco Avila, one time mayor of the tiny pueblo. At that time California was part of the mighty Spanish Empire, although not for much longer, as three years later Mexico got it’s independence and Los Angeles, briefly, became the capital of Alta California. When the United States invaded in 1846 they used the Adobe as their military headquarters. Thereafter it fell into disrepair, until Christine Sterling arrived in 1926 with a plan to preserve the area as a historical monument. She also lived in the Adobe for a while. Fun fact: you can go inside the Adobe, it’s a free museum. 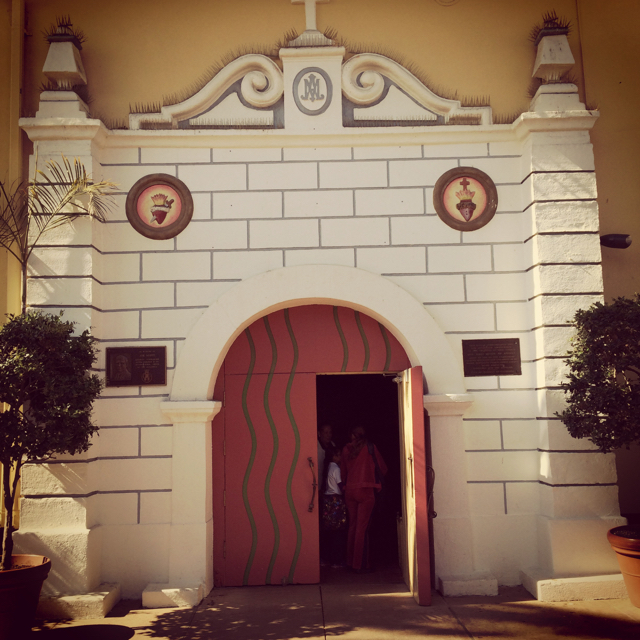 The Church still has the record for the most baptisms in Los Angeles – it did have a bit of a head start though! It was constructed in 1822 and for many years was the only church in the city. It was a big deal when it opened for business, as until then the inhabitants of the pueblo had had to make the trek to the mission at San Gabriel for feast days, weddings and baptisms. Fun fact: you can often go inside La Placita (which the church is more commonly known as, the real name being pretty long), depending on Mass times – or if there is a baptism taking place.

Next to the church is this fantastic museum. The site it occupies is also historic, the Garnier and Brunswig Buildings. The museum focuses mostly on the Mexican influence on Los Angeles (which has obviously been very substantial). They have some great exhibits and there’s a reconstructed street of the pueblo from the nineteenth century – which is a super way to see how the small farming town that Los Angeles was then looked at the time. Fun fact: this museum is also free, so pause your Union Station and Los Angeles Pueblo tour for a quick look inside. 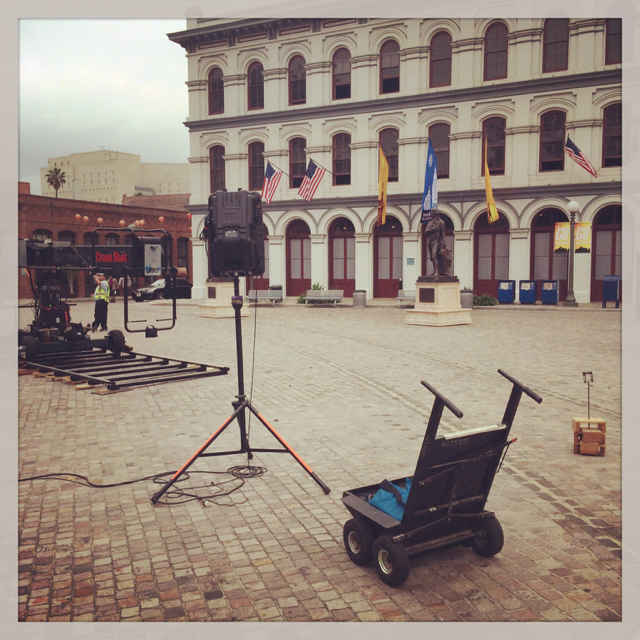 Pio Pico was a wealthy landowner who was born (in 1801), when Los Angeles was part of the Spanish Empire. He lived through the Mexican years, then achieved arguably his greatest success when California was absorbed into the United States, before dying, practically penniless, in 1894. He was the last Mexican Governor of California and he sold half the San Fernando Valley (where he had a ranch) to raise the money to construct this building. Using brick construction, with gas lighting and no less than two bathrooms on every floor – an unheard of luxury for the frontier town – it was, for a time, the finest hotel in L.A. Unfortunately though, as the area declined so did the hotel (mirroring its owners fortunes), ceasing operation in the 1950’s. Fun fact: Pio Pico’s ghost is reputed to still haunt his old hotel. See if you can see him looking out over the Plaza. 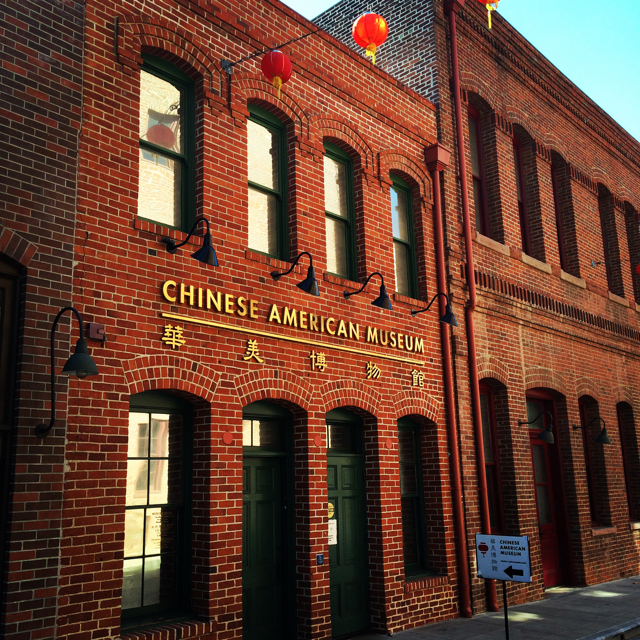 Down Sanchez Street, by the side of Pico House, sits the Chinese American Museum. Why here? Well, you’re now in Los Angeles’ old Chinatown. Immigrants from China began arriving in California in the 1850’s with the Gold Rush. Others moved here to work in construction on the Trans-Continental Railroad. Unfortunately though there was huge discrimination against them (including the Chinese Exclusion Act of 1882) and they found themselves forced to live in an area stretching from here past Union Station, to the east. It was considered a slum and every type of vice known to man (and some probably that weren’t) were available in the streets of old Chinatown. These immigrants had to undergo immense hardship and they’ve contributed hugely to Los Angeles. Fun fact: it’s not remotely fun, but read about the Chinatown massacre of 1871, still one of the largest mass lynching’s in American history, to see what can happen when an immigrant community is singled out as being the cause of all society’s ills.

Check our guide on places to eat in Los Angeles before/during/after your self-guided Union Station and Los Angeles tour.